It’s Wednesday, March 28th and the great and good of the classic era of punk and new wave gather for a night of celebration at the inaugural Vive Le Rock Awards. The O2 Islington is the place – a 1980s brown brick purpose built venue at the back of a shopping centre just to the north of The Angel. (That’s one of the blue ones on the first quarter if the Monopoly board if you’re a traditionalist like me. None of them new fangled localist boards in my house). Tonight there are 300 carefully invited guests and 200 paying punters and the squeeze is on for an evening filled with the sound of working class people getting uppitty, celebrating the old times and getting royally smashed.

It’s one of those nights that makes you pause for a moment for a ponder about the state of the music magazine industry. Looking along the shelves in your local newsagents is not always a pretty sight these days. It’s a case of turning up with your cash and hoping your favourite read is still on the go. Seems like a big name crashes every couple of months or merges to pursue economies of scale or goes 51% up for sale. 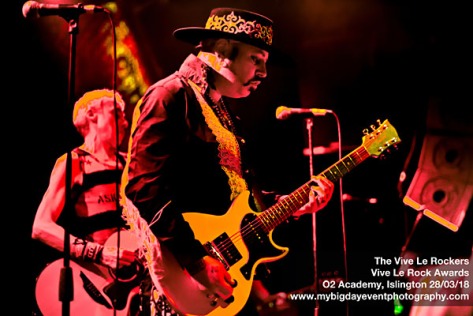 It’s the internet wot dun it of course. The print market is tough, we know that but there’s still a thriving market for niche titles that do just what they say on the tin and among those Vive Le Rock is one of the market leaders.

Founded in 2010 by the good people at Big Cheese and having recently reached its fiftieth issue, Vive is the go to publication for British fans of rebel music, whether from the past or the present day. From Gene Vincent to The Ramones, Motorhead and The Pistols to The Gaslight Anthem or White Lies or Rancid. If it used to get up your grandma’s nose back in the day or if it pisses off your kids now then it’s probably grist to the Vive Le Rock mill.

The design and content of the mag pay homage to the days of the classic fanzine so that despite all the corporate necessities that go with publishing in the twenty first century it still manages to be an outsider magazine for outsiders.

The main business of the evening is of course the distribution of awards but there’s some fine music as well and after a welcome and a little bit of history from editor Eugene Butcher we kick off with the house band for the night, who go by the soubriquet of The Vive Le Rockers’ but in fact they are most of The Urban Voodoo Machine which is about as good as a house band gets. They fall in perfectly behind each of the solo performers in turn, a masterclass in musical adaptability.

If you’re going to spend an evening celebrating classic British punk then you can’t start off better than a set from living legend T.V. Smith, formerly of The Adverts and nowadays in serious danger of acquiring national treasure status. The current issue of Vive Le Rock has an excellent feature on the music of 1978 and Gary Gilmore’s Eyes and One Chord Wonders, both from that year, still pack a punch.

He’s followed by Master of Ceremonies Ginger Wildheart with a set that includes two from  his newest long player, Ghost In The Tanglewood, to whit Daylight Hotel and Golden Tears and a favourite of mine, Toxins And Tea from 2015’s Year Of The Fanclub.

The awards themselves are shared among some of the biggest names in punk and roots music with Kirk Brandon picking up the Pioneer Award on behalf of The Cure, Best New Band going to London Oi favourites Booze & Glory and the Roots Award going to The Selecter.

Album Of The Year, presented by Shakin’ Stevens, goes to The Professionals for What In The World. It’s my first visit with Paul Cook’s gang since Tom Spencer replaced Steve Jones on guitar and they sound just as driven and gloriously rough at the edges as they did at their late 70s prime. Going, Going, Gone – a tribute to messrs Lemmy and Bowie, is a new track that’s definitely worth checking out and although I haven’t got What In The World Yet, on this evidence it’s definitely near the top of the list.

Best International Performer goes to Michael Monroe of Hanoi Rocks, who manages to overcome his natural shyness to pick up the trofe from Steve Diggle of The Stranglers. He later takes the stage for two songs with the house band during which he manages to climb over most of the stage equipment and perform some remarkable feats of balance on the mojos.

Charlie Harper is up next to get the King Rocker/Icon Award from Captain Sensible and he delivers a couple of songs including CID, as full of raucous energy as you could wish.and then it’s over to England legend Stuart Pearce to present the Band Of The Year Award to The Damned. And it’s up to them to close things down with a set that includes New Rose, Jet Boy Jet Girl and even a brief Wot.

What have I missed? A great piece of rock and roll from the legend that is Shakin Stevens, Stuart Pearce leading a chorus of Sensible’s a wanker when the cherry bereted one and his bandmates fail to appear to pick up the best band award, an encounter with the luminous choppers of Spizz of Spizzenergi and there are plenty more moments and it’ll have to be enough just to say that it was a great night and if they do it again next year I’d like to be on the list please. 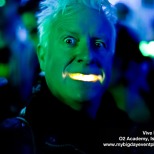 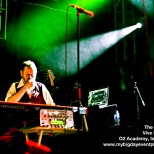 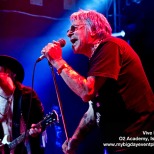 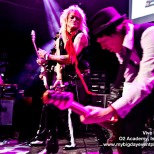 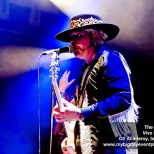 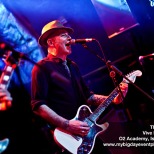 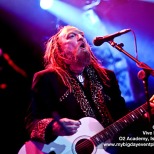 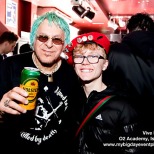 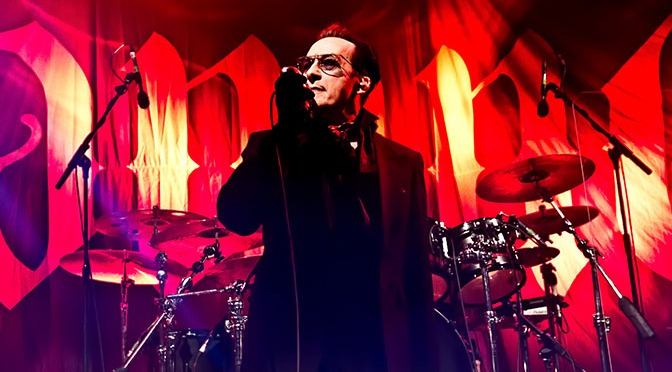 As I made my way from the car park to the Academy for the show the night air was filled with rain and the sound of bells. Ringing in the damned.

The original goth punks were rumoured to be on good form, with a new album in the works, a single getting plenty of attention and the return of Paul Gray on bass and there was a long queue waiting to get out of the drizzle.

First up one of the best surprises I’ve had in a long time. Usually before I set out for a show I check to see who the support are but on this occasion I forgot, so it’s a real pleasure to find that it’s no less a personal hero than Slim Jim Phantom, Stray Cats drummer and rockabilly guru playing some of the rawest rock and roll you ever heard. The other two places in the trio are a movable feast, (I believe Captain Sensible and Dave Vanian sometimes appear), but on this particular night the top class sidemen are James Walbourne and Nick Wilkinson, whose day jobs are as guitarist and bass player respectively for The Pretenders. 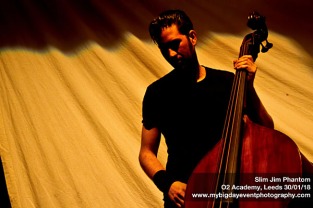 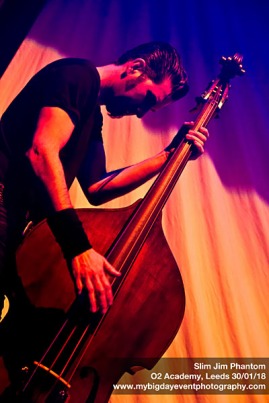 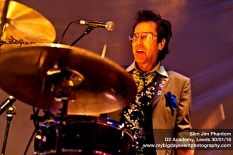 Their set takes in classics spanning the history of rock and roll from Carl Perkins’ Matchbox and The Womack’s It’s All Over Now to a terrific That’s Alright Mama that sets off at a slouching amble before bursting suddenly into a run and reminding us all just what it was that made rock and roll great in the first place. They tie things up with the Cats very own contribution to the rock and roll classic song book – Rock This Town.

And so on to the main event and the Academy was pretty much full for The Damned who open with All Messed Up, Lively Arts and Silly Kids Games, representative of a set that’s heavily weighted towards the band’s glory days from the late 70s until the early 80s.

There’s a great British tradition of looking for the clay in the feet of our musical heroes and as such I feel like I ought to say at this point that The Damned weren’t a shadow of their former selves. We don’t have Johnny Hallydays in England.

In fact The Academy crowd is treated to a great show with the band on excellent form, having a fine old time and revelling in the sheer joy of making some very loud music in company of several thousand like minded individuals. What more could you ask?

Front and centre Dave Vanian is bathed in Hollywood light as he struts his stuff with his retro mic and long black coat, while over to stage left The Captain finds himself a little pool of purplish darkness in which to hop and bop and twist, leaning over his guitar like a tangled marionette and offering occasional pithy comments. Paul Gray dances almost non stop and even Monty manages to escape his decks for a few brief moments of electrifying dad dancing during New Rose. 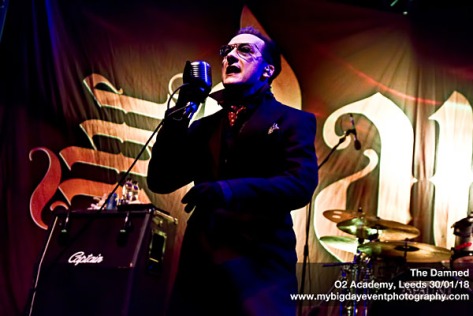 Highlights include an anthemic Stealer Of Dreams, a raucous Elouise and the new single Standing On The Edge Of Tomorrow, featuring some ringing guitar riffs but what was most noticeable was how adeptly the band switches styles, one moment full on punk, next moment Vanian is transformed into a Neil Diamond style crooner. At one point he’s a fire and brimstone Old Testament prophet conducting a chorus of Woah ah Ohs on Devil In Disguise, next he seems to be channelling the spirit of The Housemartins. 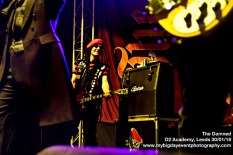 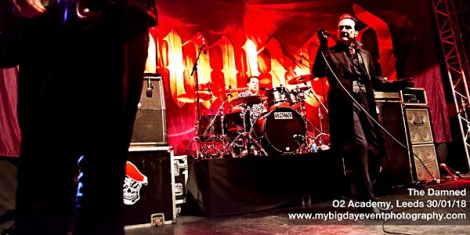 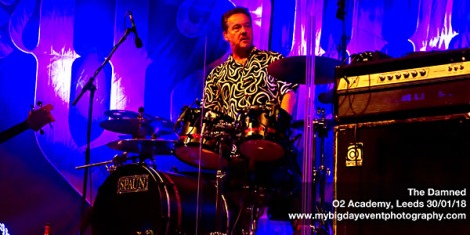 The show closes with a mixture of old and new including Generals, Evil Spirits, (again the forthcoming album sounding like a good thing) and the classic Smash It Up before the band responds to the appeals of the assembled company by returning for a final cover of the Elton Motello classic Jet Boy, Jet Girl.

I regret to say that I was proper poorly at this gig and for a while after. I remember going to two wrong venues, missing the excellent Boss Hoss who I had been looking forward to, just catching the last song of the three shot window for The Damned, who were as spikey as you could wish and just exuded charisma and being pushed back in my seat by the physical force that is Motorhead. Other than that it’s all a bit sketchy. Some pictures I’m quite pleased with though so here they are.