So City of Culture year has been and gone and what a year it was. From my point of view it meant Jeff Lynne, The Flaming Lips, Ocean Colour Scene and lots more. The question now is whether or not Hull can continue to attract big names, to the new Venue, or the football stadium or my special favourite Zebedee’s Yard for open air gigs and, of course, to the amazing Victorian pile that is the City Hall.

Early signs are promising – maybe the City of Culture can do attitude is still around – and we have the likes of Orbital and Chase & Status and local hero Calum Scott lined up for the summer. The year’s major musical events start out with a sold out show from 80s pop legends Erasure at the City Hall. 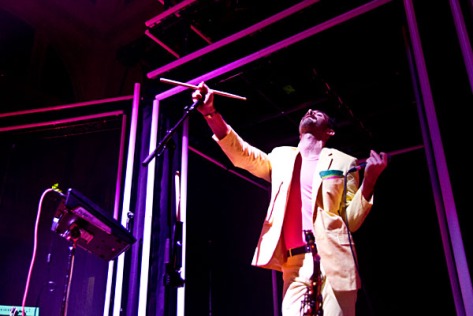 Support comes from up and coming nu-disco star Bright Light Bright Light who is making his second visit to the venue, having played last year’s LGBT rights festival night. He’s got some great catchy songs, a style that’s midway between classic pop and musical theatre and a nice line in restrained ironic showmanship. Plenty of the crowd at the front are obviously fans already and it looks like he’s made a few more by the end of his set.

The stage set up for Erasure is a surprise, with the duo separated from each other for most of the show, Andy Bell performing in the narrow space between the front of the stage and a large ziggurat constructed from scaffold and fluorescent tubes atop of which is Vince Clarke with his keyboards and a guitar. There are two dancers and singers who initially occupy frames, also fluorescently defined, on either side of the stage but their contribution is pretty minimal. All eyes are on Bell who dominates proceedings by sheer charismatic presence although Clarke descends from the gods towards the end of the set it almost seems like a one man show.

But what a great show it is. Even though I’ve been playing Erasure tracks all week I’m amazed by the strength in depth in their back catalogue. The set kicks off with an eerily gorgeous Oh L’Amour and heads for a climax with Sometimes and Respect but along the way are Stop, Drama, Blue Savannah and a variety of Love related matters including Chains Of, Victims Of and Who Needs It Like That.

Tracks from the new album World Be Gone are interspersed throughout and on tonight’s showing it’s a strong piece of work. All around the City Hall it’s pretty much a non stop dance-a-thon, from the main hall to the steep galleries and what more perfect way could there be to celebrate some of the most elegant and romantic pop music ever than dancing the night away.

By the time Clarke descends for the last couple of songs you’d imagine that people would be exhausted but of course they’re not and the final Respect is a triumphant statement of the power of great pop music to unite people in joy. Fantastic stuff. 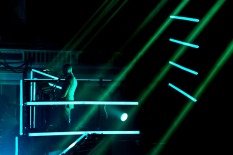 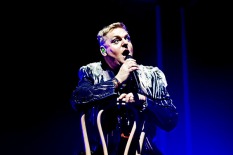 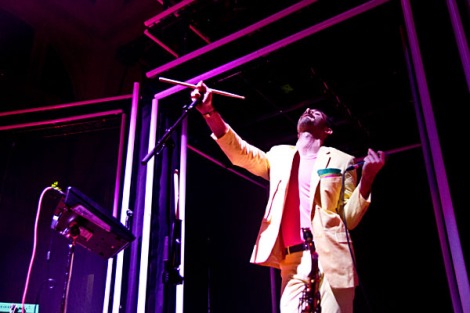